The elephant in the room of musical ensembles, this combination of downtown legends convened by saxophonist and cultural catalyst John Zorn makes its premiere in front of The Joshua Light Show for an evening of historic proportions. Lou Reed, (whose experience with lightshows includes Warhol’s Exploding Plastic Inevitable) features on guitar and electronics, alongside dub apostle/bassist Bill Laswell and free jazz originator, drummer Milford Graves. Absolute giants in their field all four, the group’s challenging and rewarding sounds combine with the frenetic colorplay of The Joshua Light Show for an explosive, super-cinematic experience.

The Joshua Light Show, founded by multimedia artist Joshua White, are perhaps the most legendary visualists of live music. As resident artists at Bill Graham’s Fillmore East during the late 1960’s, and in performances at Woodstock, Newport Jazz Festival, Tanglewood, Carnegie Hall, and the classic film, Midnight Cowboy, White and his cohorts created live, colorful, psychedelic projections behind the great bands of that era including The Grateful Dead, Jefferson Airplane, Janis Joplin, Jimi Hendrix, The Doors, and The Who. 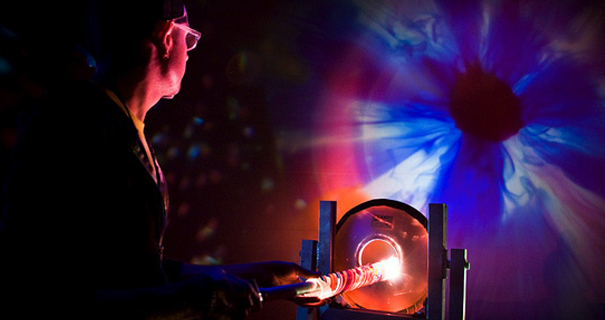 Regenerated in part by exhibitions at the Tate Liverpool, Centre Pompidou, MOCA, the Hirshhorn Museum, and the Whitney, the new Joshua Light Show has performed across the United States and Europe in concert with a new generation of art rock and experimental music luminaries, in addition to creating its own fulldome son-et-lumière for the Hayden Planetarium at New York’s American Museum of Natural History.