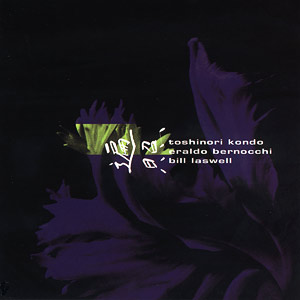 As firmly rooted in the vibe of Miles Davis’ post-Bitches Brew “electric” phase as it is in the beats, tones and noises of the hip-hop and dub undergrounds, Charged represents a vital addition to the newly formed Innerhythmic imprint. Call it a soundtrack for the future of the avant garde metropolis, or simply an international “power trio” record — either way, the collective statement made here by three of the most individual and revolutionary musicians playing today is one of liquid, funky, mutant and at times brutal sonic emmissions from the distant edges of electronic space and time.

Although he was once dubbed the “Japanese Miles Davis” by the German magazine Musikwoche, over the years Toshinori Kondo has cultivated a sound that is strictly his own as leader and producer of his progressive agit-punk-funk group IMA. Eraldo Bernocchi has collaborated with numerous artists in the ambient and dub styles — including Mick Harris (Scorn), Almamagretta, SOMMA (with Bill Laswell), and more — from his Milan-based Verba Corrige production studio. Bill Laswell is a veteran of countless sessions and live shows as both bassist and producer, having participated in or produced some 300 albums across all genres and boundaries since his arrival on New York’s “no wave” scene in 1979.

Charged brings together the improvisational strengths of all three musicians in an atmosphere of “third mind”-like proportions: using amplified sounds and beats, the silences between, and the recording studio itself as an instrument, this is music borne out of living kinetic energy, probing the reaches of extreme voltage and subsonics with a vengeance.