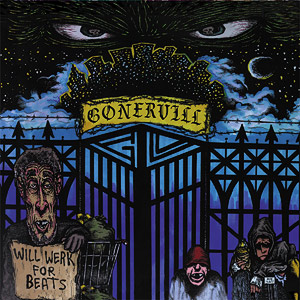 Fear Is the Killer

Sun at Your Back

Over the years, as hip-hop music has merged further into mainstream American culture, it has also given rise to a veritable breeding ground of new hybrids that are decidedly off the so-called beaten path – that are in fact on the leading edge of some of the most inventive music being made in the last decade. Gonervill: The Album – released on Bill Laswell’s collaborative Innerhythmic imprint – is part of that innovative yet subversive thread. Hailing from the beat-rich byways of the SF/Bay Area, where turntable alchemists like DJ Shadow, Cut Chemist, Q-Bert, Peanut Butter Wolf and more have all contributed to what has come to typify the far-out “left coast” sound, the Gonervill crew offer up their own unique version of mutated “organitronic” hip-hop, melding live and looped sounds into downright soulful song structures.

Gonervill is essentially a triumvirate consisting of DJs Extrakd and Eddie Def, with live beats played by Brain (former drummer of Bay Area punk-funk units like the Limbomaniacs and, currently, Primus). With special guest appearances from guitarists M.I.R.V. and the bemasked Buckethead (of Praxis fame and his own Deli Creeps ensemble, as well as a much-touted stint with Axl Rose and Guns ‘n Roses), Gonervill explores the far reaches of instrumental hip-hop with a distinctly acid funk-laced edge.

“The name came about when DJ Disk and I were clowning in the studio while he was making his record Ancient Termites,” Extrakd relates, referring to one of the former members of the Bay Area DJ crew Invisibl Skratch Picklz and a huge innovator in his own rite. “Disk did some completely crazy skratch and I said ‘Man, that was gonervill!’ Eventually we turned it into a label that makes breakbeat records for DJs. We all use the term from time to time; it can represent a mental, emotional, or spiritual place where you’re not really there. It’s where you’re creating music or art, the best place to be, and you’re almost in another reality.”

This glimpse of alternative dimensions is what gives the tracks on Gonervill their otherworldly feel. Buckethead’s arrangement on strings gives “Muad’ Dib,” the closing nod to sci-fi writer Frank Herbert’s Dune, a mystical and futuristic bent, while M.I.R.V. lends his signature eccentric and almost Hendrix-like sound to “Unseen Worlds,” one of a half-dozen pieces on the album where he stretches out Cali-style (and true to the freaky persona he’s cultivated for himself in the Bay Area in bands like the Limbomaniacs and on his solo project Cosmodrome). Throughout the proceedings, the turntable and production skills of Eddie Def and Extrakd shine through, particularly on the aggressive wax attack “Infiltrating Assassin” and the old-school-sounding “On & On,” among many others.

“Having a DJ or turntablist in the mix instantly makes whatever you’re doing more rhythmic and funky,” Extrakd explains. “Since most everything we do is based on cutting up rhythms and patterns, it influences our playing as well. I didn’t feature the bass guitar too much on this record, but as a bassist I love to play off the rhythms DJs make, and vice versa. I think Bill Laswell likes to play off them as well, and that’s part of why I’ve always admired him as a bass player and producer. We’ve also been fortunate out here in the Bay Area to know and be around great DJs like Eddie Def, Quest, Flare, D-Styles, Disk, and Q-Bert. I mean, it feels close to what it must have been like to be around the amazing sax soloists when bebop was hot. I know DJ-based music has been getting trendy again, but these guys will continue doing their thing for years to come.”

As for their musical influences, Extrakd cites one particular record that speaks volumes about coming full circle in hip-hop music today. “It’s funny, but everyone points to ‘Rockit’ as their first and biggest influence. We have to give big props to Bill and to DXT for setting off a musical genre. We have too many other influences to name, but punk rock, industrial, dub reggae, funk and soul, jazz, electro…all these and even ’70s rock like Zeppelin and Sabbath are a good start.” And with the release of Gonervill, here is one more breakbeat neo-classic to add to the canon.