Buddy Miles – Hell and Back 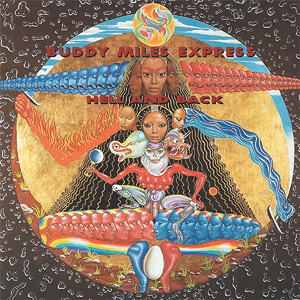 All Along the Watchtower

Let it Be Me

Be Kind To Your Girlfriend

Nothing Left to Lose

Buddy Miles re-emerges with a sonic jolt of hard rhythm & blues on his most powerful recording ever, fusing the deepest circuits of soul, gospel, funk and rock ‘n roll while channeling the influences of Wilson Pickett, Jimi Hendrix, Funkadelic and more…

In the grand pantheon of rock and funk drummers, Buddy “Sugah Bear” Miles owns a storied legacy that stretches back to the psychedelic rock heyday of the late 1960s…and all the way up to today. Hell And Back is his most significant studio project of the last decade (aside from a power trio called Hardware’s bone-crushing Third Eye Open, another original Black Arc release produced by Bill Laswell that features William “Bootsy” Collins on space bass and Steve Salas on guitar), and at the time of its release marked the long-overdue return of the nomad gypsy drummer and his Buddy Miles Express-giving you more Miles to the gallon and some new grooves to galvanize the tread in your worn-out tires.

Miles has come a long way since his first professional gig, when at the age of twelve he began playing drums in his father’s jazz combo in Omaha, Nebraska. It was only a metter of time before his inimitable bottom-heavy style attracted the attention of the multitudinous R&B and doo-wop groups who were touring the chitlin circuit and, eventually, the teenaged Miles landed a seat as part of Wilson Pickett’s live revue.

In 1967, while performing with Pickett, he was approached by Michael Bloomfield and Barry Goldberg and asked to join a new psychedelic rock band called The Electric Flag. With Miles on drums, the Flag recorded one high-voltage slab of vinyl before parting ways in 1968. Up from the skies came the freshly-formed Buddy Miles Express and a renewed friendship with Jimi Hendrix, with whom Miles had been running as early as June of 1967, when the two played the Monterey Pop Festival. Hendrix’s archetypal and apocalyptic Electric Ladyland marked the beginning of their fruitful collaboration in the studio, with Miles laying down a solid backbeat dripping with the blues for “Rainy Day” and “Still Dreaming”. Hendrix would return the favor by writing the beautifully envisioned liner notes for BME’s Expressway to Your Skull and producing tracks for the follow-up Electric Church in 1969.

After the breakup of the Jimi Hendrix Experience in late 1969, Hendrix recruited Miles for what would be one of the lasting musical statements of both their careers. Over the protests of his management, who feared the repercussions of adopting a so-called “Black Power” stance in his music, Jimi formed the Band of Gypsys with Billy Cox on bass and Miles on drums and backing vocals. Arguably the first true “black rock” band, the Gypsys debuted at Bill Graham’s Fillmore East on New Year’s Eve 1970 and opened their historic set with the Hendrix classic “Machine Gun”. Writer David Henderson described Miles in action in ‘Scuse Me While I Kiss the Sky, the definitively poetic Hendrix biography:

Buddy Miles pauses, eyes closed, like a Buddha within a silver metal bubba flowing outward, his snare shots wide and strong. He beats into the depths of a groove, the snare shots ratatatting stronger and stronger. Miles captures and entrances you with his repetition. The intensity of his shots ring out on a par with Jimi’s guitar.

The Fillmore set formed the basis of the Band of Gypsys live album, which featured two tracks written by Miles-the Sly Stone-influenced “We Gotta Live Together” and the seminal “Them Changes,” which has since become the signature song of the Express. Ironically, although Band of Gypsys was in many ways a breakthrough for Hendrix, the group dissolved scarcely two months later for reasons that remain mysterious even to this day. Miles-o-philes can dig other Gypsys cuts on the obscure Hendrix collection Loose Ends, an invaluable document of rehearsals and outtakes that features the extended funk workout “Burning Desire,” among others.

Fast-forward to the present day, with the re-release of Hell And Back, and the legacy of Hendrix-as well as the influences of other artists with whom Miles has worked-still burns brightly, fueled by deeply soulful performances and a rootsy emphasis on the funk. Mixing original compositions with reworkings of some favorite standards, Hell And Back recalls the funky exuberance of the string of albums that Miles and the Express recorded in the 1970s for the Casablanca label. (Fittingly, the self-proclaimed Maggot Overlord-one George Clinton-of another Casablanca act called Parliament would hire Miles to play drums on the Funkadelic anthem “Comin’ Round the Mountain” for the incredible Hardcore Jollies album, released in 1976.) But for all its ’70s funk flavor, Hell And Back also boasts a technological edge-as heard in the impeccable mixing of Miles’ drums, the subsonic throb of the low end, and the enveloping warmth of the organ, bass and guitars-that hurtles the music forward into the 21st century.

Opening with a remake of Albert King’s “Born Under a Bad Sign,” Buddy seems to make a forceful but ironic statement concerning his whereabouts in recent years, and his soul-stirring take on the blues classic serves more than anything to clarify that the return of the Express is no jive. The feedback-laden intro to Dylan’s “All Along the Watchtower” soars with the angel of Hendrix, complete with a section of the guitar solo recorded backwards with a nod to “Are You Experienced”. (Those who have never seen Miles shred a guitar might be pleased to learn that, like Hendrix, he’s a lefty who plays a right-handed Strat strung upside-down.)

A swirling Hammond B-3 organ gives “The Change,” a Miles original, its distinctly churchlike feel as Buddy infuses the story of busted romance with a big-bottomed thump and some paint-peeling vocal tracks. As ever, Miles is equally at ease with a ballad, as his powerful and pleading voice attests in the Everly Brothers classic “Let It Be Me”. Supported by the spirited brass arrangements of the Uptown Horns, jams like “The Decision” surge ahead with a Santana-like feel that takes flight with a juicy organ solo, while the driving, Stax/Volt-inflected “Be Kind to Your Girlfriend” grooves on in the spirit of Otis Redding. Finally, Hell And Back wouldn’t be an Express album without the nastily funkified rhythms of “Nothing Left to Lose,” where the youngbloods from Chicago are turned loose to flex their muscles on scratch guitar and string-popping bass.

Whether it’s silky soul, sizzling fatback rhythms, or over-the-top crunch, the Buddy Miles Express has come a long way down the highway, coming up with a whole new thang to expand even further on the ever-shifting boundaries of the black rock canon.