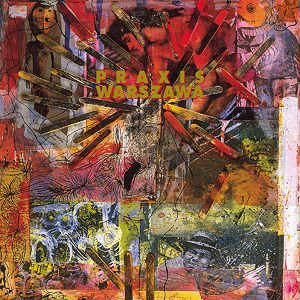 Beneath the subsonic bass of producer Bill Laswell, the funk-laden beats of drummer Brain, the extreme guitar terror of mutant virtuoso Buckethead and the deftly rendered scratching of guest DJs DXT, Mixmaster Mike and Disk, Praxis represents an inspiring, at times mesmerizing and even harrowing foray into the collective mind of a lethally futuristic live unit. Group improvisation and sheer sonic assault are all pushed to their outer limits-true to the ethos of “free jazz” outfits like Last Exit and Painkiller, of which Laswell has also been a member, but with a brash element of youthful exuberance that gives the music a fresh sound. Whether ambient, dub, funk, hip-hop, metal or avant garde, each is wired and detonated across a canvas of controlled chaos.

The name Praxis has been applied over the years to a number of loose configurations of musicians either fronted or produced by Bill Laswell, going back to an experimental 12-inch in the early ’80s on Celluloid Records that consisted of shortwave noise over drum machine beats. Since then, a revolving army of innovators from Bootsy Collins to John Zorn have contributed to Praxis projects, particularly Transmutation, released on the Axiom label in 1992, and Sacrifist, released on Subharmonic in 1994. The most recent studio album Metatron [Subharmonic, 1995] features the core of the current group. The performance documented here was recorded in Warsaw, Poland and has never before been released. It has been unearthed, reconfigured and remixed by Bill Laswell as a special package for Innerhythmic.

When asked how he first met Buckethead, Laswell points to a series of connections among like-minded musicians that has always seemed to play a role in any project he conceives. “I’d originally worked with Brain when we were putting together the Limbomaniacs album [Stinky Grooves, from 1990 on In-Effect/Relativity], and he told me about Buckethead and gave me a video of him playing in his room. I gave that to Bootsy, who it turns out Bucket is a big fan of, and we both were interested in what he was doing. After that Bootsy and I sort of helped him in the direction of collaborating and experimenting more, instead of committing to a full-on career with a corporate situation, which he almost did get into at one point. That in turn led to the Praxis record [on Axiom].”

Speaking of himself in the third person, Buckethead has found the whole experience to be quite satisfying musically. “Buckethead says Praxis is a big binge loaf, like terror long dangler buddies on a scoop rack,” he riffs in his inimitable southern Cali patois. “Taking people away in their imaginations is a lot more important to Buckethead than freaking people out with the guitar. He practices a lot, but that’s so he can make the guitar sound like a rollercoaster, or bombs, or scapulas getting ripped open. He doesn’t think about speed, but sometimes it takes a thousand notes to make one sound. When he practices, he imagines video game characters running through all these different fields and meeting all these weird things; he never thinks about scales or techniques.”

Like Brain in his most recent role as the regular drummer in Primus, at one time Buckethead was also well-known in the SF Bay Area for his own avant-shred combo The Deli Creeps (which off and on featured the fearsome Throatrake on vocals), as is DJ Disk, whose pivotal contribution to the Invisibl Skratch Piklz with Q-Bert and Mixmaster Mike is now legendary in underground hip-hop and turntablist circles. Both Disk and Mike offer their deepest reverence for DXT (a/k/a Grandmixer D.ST), himself a pioneering presence during hip-hop’s Bronx nativity in the early ’80s, both as a crucial member of Afrika Bambaataa’s Zulu Nation and as originator of the much-imitated scratch technique displayed on Herbie Hancock’s worldwide dancefloor hit “Rockit,” released in 1983.