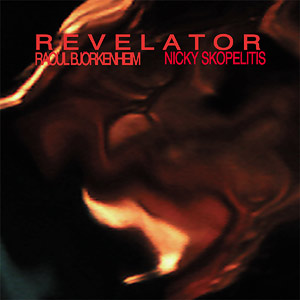 Although they both claim the guitar as their instrument of choice, Nicky Skopelitis and Raoul Björkenheim probably couldn’t come from more radically different backgrounds. But one essential trait they do share is an inexhaustible thirst for new directions and new sensibilities in music, and with Revelator – a collaboration that, true to its title, attempts to reveal the unexpected as it also explores a slightly spiritual edge – the guitar becomes a vehicle for two distinct voices. From there, the quest for a third voice begins: where creative forces meet to offer up a glimpse of one possible musical future.

Nicky Skopelitis, a lifelong New York native, studied the trumpet as a child before gravitating to the guitar and a multitude of stringed instruments. True to his Greek heritage, he was fueled by an ongoing interest in Mediterranean and Middle Eastern musical styles. As a teenager he became an integral fixture on the East Village downtown “no wave” scene, and in the late 70s and early 80s performed with bassist and partner-in-crime Bill Laswell in the avant-rock unit Curlew and in a later manifestation of Material (with Laswell, Michael Beinhorn and Fred Maher), as well as with offshoots like Anton Fier’s Golden Palaminos.

Skopelitis has recorded and played with such luminaries as Ginger Baker, guitar great Sonny Sharrock (on the now-classic Faith Moves) and Palestinian oud and violin player Simon Shaheen, to name a few, and has contributed to numerous Laswell-generated studio projects over the years both as musician and producer – most notably on his own Next To Nothing (Virgin/Venture) and his quintessential Axiom label release Ekstasis, a name that he took up once again for a group recording in 1999 called Wake Up and Dream, released by the CyberOctave imprint. Skopelitis’ influence can also be heard on a multi-layered ambient-jazz excursion with legendary drummer Tony Williams (featuring Pharoah Sanders, Byard Lancaster and cornetist Graham Haynes) under the group name of Arcana, released on Axiom in 1997 as Arc of the Testimony.

Raoul Björkenheim was born in Los Angeles and spent his childhood shuttling between cosmopolitan centers in Europe and America before eventually settling in his familial homeland of Finland. He enrolled in the Helsinki Conservatory of Music, where he spent a year studying guitar and various forms of ethnic percussion. In the late 70s, he transplanted to the Berklee School of Music in Boston to immerse himself in composition, drawing from the work of Bartok and Stravinsky and jazz monoliths Eric Dolphy and Charles Mingus for inspiration.

Björkenheim first appeared on three recordings with drummer Edward Vesala and his Sound & Fury ensemble before forming his own group Krakatau – a revolutionary and constantly evolving collective of musicians that combined ethnic rhythms and harmony structures with sheer visceral impact. After two independent recordings titled Ritual and Alive (the latter a live document of a stripped-down power trio that led to performances with drummer Ronald Shannon Jackson), Krakatau was signed to the ECM label for a series of releases that began with the critically acclaimed Volition in 1993. Since then, Björkenheim has been involved in numerous studio and live situations, particularly the multinational aggregate Phantom City, founded by Australian synthambient composer Paul Schutze and featuring, among others, bassist Bill Laswell, who suggested this collaboration with Skopelitis.

Revelator might be identified as a “guitar-based” recording, but the range of sound explored here by Skopelitis and Björkenheim is so unrestricted, inventive and all-encompassing as to make the term almost archaic. Darkly hypnotic drones, delta blues, African guitar styles, controlled feedback and harmonics, Indian sitar sounds and countless other strange-beautiful sources coalesce in an atmosphere that is by turns majestic and mystical, celebratory and brooding. A piece like “Epiphany” progresses through several moods, from the seamless dharma blues riffs of Skopelitis to Björkenheim’s eerie bowed guitar fugue and finally a cascading and buoyant electric-acoustic interplay, with Björkenheim nearly Sharrock-like in his use of rising and descending octaves.

Other tracks are deeply vivid in their imagery; “Fresh Meat and Roses” conjures a sensuous nomadic dirge – a humid trail through phantasmagorical mists of sound, the low end undulating like the constantly shifting dunes of the desert, while “Right As Rain” suggests acoustic rivulets flowing into some distant ocean. The proceedings throughout – and particularly in the opening piece “Sacrament” – have tacit links to Eastern and Indian rhythmic cycles (owing primarily to the anchoring presence of Bill Buchen on tabla), but all at once the tabla can give way to the textural backdrop of interwoven chords and breathing ambience, with wailing voices spiraling over the top and into the stratosphere. Whatever the dynamics, the changes never feel forced or contrived; this is freely created music as natural in its progression as it is endlessly suggestive in its wake.

If a musical instrument is truly an extension of the musician who plays it, then both players here have managed to bring their distinctive personalities to the fore, blurring the lines and begging the inevitable question: where does the musician end and the instrument begin? There is a thread of spiritual energy at work on Revelator, and although the true source of this energy is hidden in ambiguities, it might be called “a higher form of intuition, for it comes as an idea, as a complete theme with its improvisation, as a phrase creative of a poem,” as the Sufi musician and mystic Hazrat Inayat Khan describes it. In this respect, Revelator lives up to its name as an ecstatic and illuminating musical statement, and as a revealer of creative secrets no one had really thought to try and decipher…until now.